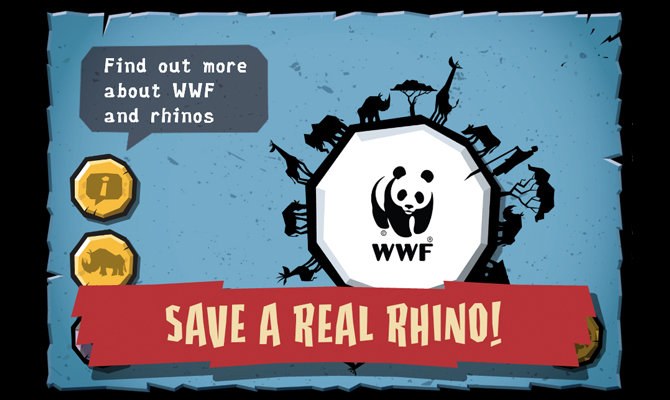 Rhino poaching continues to escalate at unprecedented levels – with 668 rhino being killed in South Africa in 2012, representing an increase of 49% on the previous year.

In the first three months of 2013, South Africa lost 203 rhinos to poaching – more than two rhinos per day. Conservationists and their agencies are now being challenged to find new ways of dealing with the scourge.

WWF South Africa (WWF-SA) recently announced a number of strategic initiatives to combat rhino poaching, including a focus on addressing the increased demand for horn in South-East Asia and in particular, Viet Nam.

Deploying the global phenomena of mobile gaming, the organisation aims to shift perceptions about the use of rhino horn via an interactive and engaging mobile game, “WWF Rhino Raid”.

Dr Morné du Plessis, CEO of WWF-SA, believes the game represents a novel approach to the challenge of effective communication around rhino issues: “The objective is not just to have fun playing the game, but to begin a process of debunking the myths around the use of rhino horn. ”

“It is becoming increasingly recognised that games can positively influence behavior change; accordingly, the game will be localised into Asian languages in target countries”, comments Dr Andrew Baxter, Head of Business Development at WWF. “Rhino Raid is set to be both an entertaining game and a source of informative facts. A daring rhino character called Rad takes up the fight against poachers in gameplay that takes Rad on an epic journey, as he chases down the poachers in an attempt to save his species.”

So, What's it all about?